As an interventional cardiologist, a large part of my job is dealing with heart attacks and fixing the blocked arteries that cause them. I often hear the term “Widowmaker” from patients or their families who want to know if this is the type of heart attack they’re dealing with. People often refer to heart attacks as widow makers inaccurately, which generates a great deal of anxiety. Of course, I don’t blame them. No one wants to be dealing with something known as a Widow Maker!) In this article we will briefly review the blood supply to the heart, what happens in a heart attack, and accurately define the widow maker heart attack in order to gain a better understanding of the term the Widowmaker.  To understand this better make sure you also read ‘Did That Stent Save My Life? and ‘Should I Take An Aspirin Every Day?’.

There are three arteries that run over the surface of the heart and supply it with blood. (See the diagram above.) There is one artery on the right side and two arteries on the left side of the heart. The one on the right is known as the right coronary.  On the left side, which is the main side, we have the left anterior descending (LAD) that runs down the front of the heart and supplies the front and main wall, and then the left circumflex that supplies the side wall. When the main artery down the front of the heart (LAD) is totally blocked or has a critical blockage, right at the beginning of the vessel, it is known as the Widow Maker. (The medical term for this is a proximal LAD lesion). No one knows exactly who came up with the term, but the reason they did is likely that if that artery is blocked right at the beginning of its course, then the whole artery after it goes down. This essentially means that the whole front wall of the heart goes down. As far as heart attacks go, this is a big one, with big consequences if not dealt with appropriately; it’s why we take it so seriously. 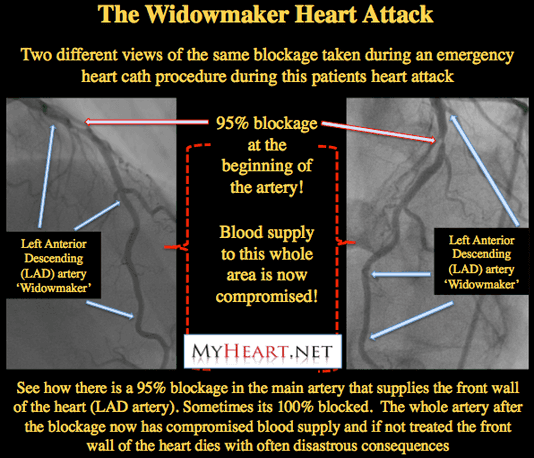 A heart attack generally occurs when there is a critical blockage in one or more of the arteries that supply the heart muscle with blood. Within minutes of the critical blockage occurring the heart muscle stops working, and if blood flow is not restored within minutes to hours the muscle typically dies. The consequences are often catastrophic, the heart attack may be large enough to lead to sudden death, and unfortunately many patients do not make it to hospital alive. For those that survive and make it to hospital, the outlook is certainly improved, but if the blood supply is not restored in a timely fashion, a scar replaces the once beating heart muscle and the heart is often irreversibly damaged. The good news is that if done in time, we can treat these lesions to good effect with the use of minimally invasive techniques such as stent placement (see the diagram below).  Also, check out our article on the new disappearing stent. 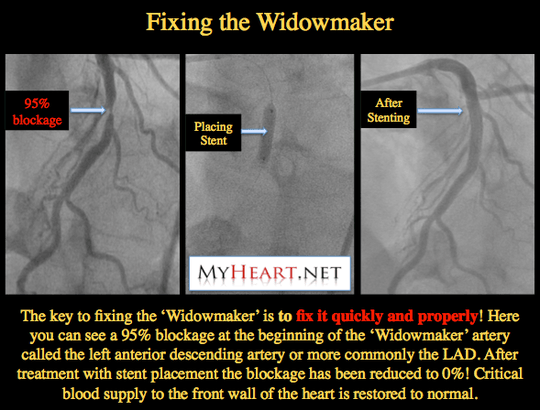 If you look carefully at the 1st picture at the top of this article, you will notice there is an artery on the left side called the Left Main Artery. It supplies both the LAD and the Left circumflex, both of the left sided arteries. Now imagine if that artery went down, it would lead to loss of blood supply, to the entire left side (the main side), the front wall, and the side wall. As you can imagine, critical blockage of the Left Main coronary artery, is the mother of all Widowmakers! A heart attack caused by this truly drives fear into cardiologists, surgeons, and patients alike, because if that goes down, go figure!

To help further explain the widowmaker, I created this video. The video includes a thorough explanation of the condition, as well as survivability and life expectancy – two aspects of the widow maker not covered elsewhere in the article.